UK export trying to see as much of the States as I can. Based in San Francisco. 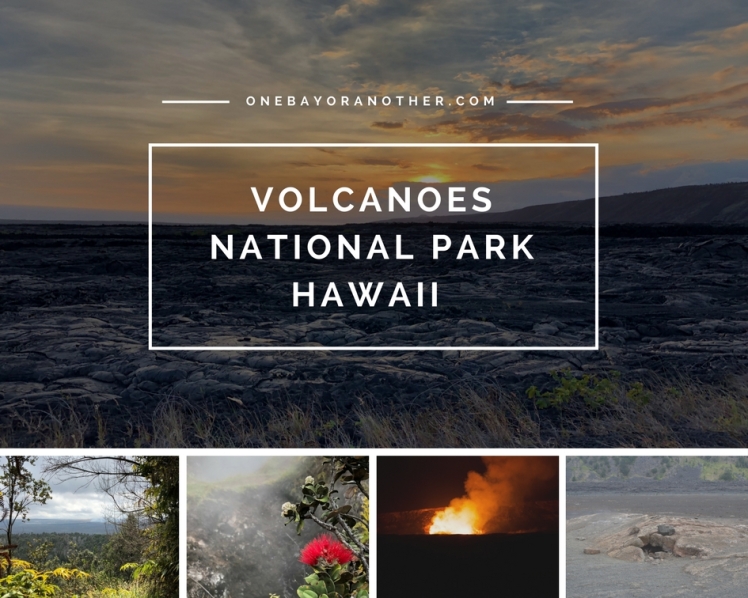 Hawaii Volcanoes National Park is located in the south-east of Hawaii Island (often referred to as ‘Big Island’ to avoid confusion with the other Hawaiian islands). It sits on not one but two active volcanos; Mauna Loa and Kilauea.

Arriving at sunset after driving from Kailua-Kona, we witnessed the sun setting over lava fields. Driving back through the park at dusk was pretty special too, the crater of Kilauea bubbles and smokes almost nightly, the orange lava casting an eerie glow across the crater.

There is more to the park than simply hiking; lava tubes (tunnels) are easily accessible and a short walk from a car park, Kilauea crater is best viewed from the visitor center, and it’s even possible to witness lava flowing into the sea on a boat trip!

For me, a hike across an active volcano through the park was high on my list for Big Island.

On our first full day in Volcano, we collected supplies from the Kilauea General Store. There really isn’t much in Volcano but the general store makes fresh subs that make for a tasty picnic in the park so I’m not sure what else you could really need!

Being sensible, we made a quick stop at the visitor center to check the safety advice and which trails were open. One of the most popular trails, the Crater Rim Trail, is partially closed due to an eruption in Halema’uma’u Caldera.

We decided to combine the open section of the Crater Rim Trail with the Kilauea Iki Trail and Ilahi Trail, which turned out to be an amazing combination taking us across a crater, through dense forest, and around part of the crater rim. We saved the route on AllTrails if you are interested!

The route we took (7.1 miles) was a little shorter than the Crater Rim Trail, so we had plenty of energy left to discover the Volcano Art Center Center Gallery and the steaming vents, both of which were worth seeing!

In less than two days, we’d managed to walk through lava tubes, see the sunset over lava fields, hike 7.1 miles, see steam vents, and the art gallery. By this point, it was time for a drink.

As I mentioned, the town of Volcano doesn’t have much by way of tourist attractions, but it does have a winery! Volcano Winery offers bargain $5 tasting flights and is set in a lovely little spot near the town. Although I wasn’t sold enough to take a bottle of anything home with me, the wines were certainly different and interesting!

Dining options in Volcano are also somewhat limited but what is on offer is very good. Thai Thai is a solid (would you believe…) Thai restaurant in the middle of town. In October it wasn’t that busy and we just showed up. A slightly fancier choice is Kilauea Lodge, which somehow manages to incorporate German and Hawaiian cuisine. It sounds like it shouldn’t work and I was skeptical, but like a lot of unusual Hawaiian food combinations, it was surprisingly delicious. 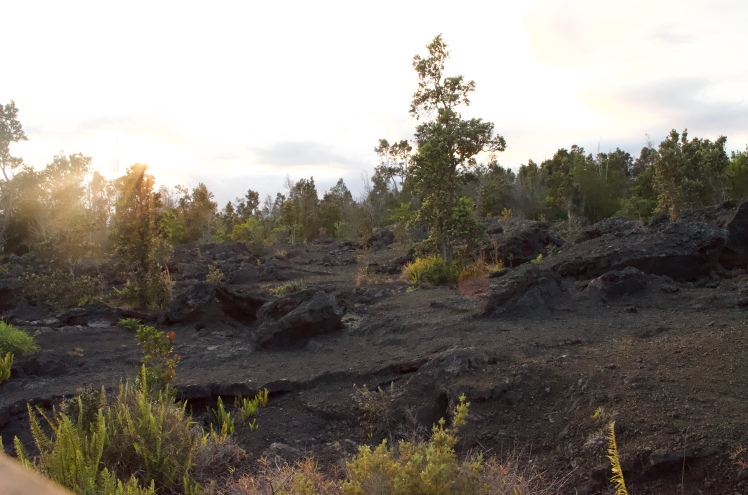 After all of that hiking, wine tasting and eating we needed a cozy place to rest our heads. We stayed at Volcano Acres Ranch B&B and couldn’t have wished for better. Welcomed by the resident goat, Lucy, owners Randy & Theresa have thought of everything, plus the breakfast is wonderful.

Our short two-day stay in Volcano was really all we needed to pack in a range of activities and see a fair bit of Volcanoes National Park. If we had stayed another night or two, I would have loved to take a trip down (either by hiking or by boat) to the active lava fields, where you can see lava spilling into the sea. I also would have quite liked to check out Pahoa as it’s known for being full of artists.

That said, we didn’t feel rushed or that we had missed out on anything, especially as the lava flow was minimal when we visited so we might not have seen much anyway.

Going to Volcanoes National Park feels like visiting the end of the World but a quick hop back to Hilo put us on a flight over to Maui, returning to busy resorts and continuing our Hawaii adventure.